Home > About Service > What is Kanji

Kanji, the wisdom of human and treasure heritage received from ancient times and deliver to the future generations 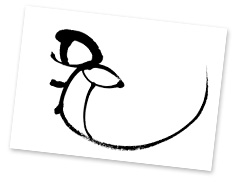 Kanji is the Chinese character and every character means the symbol of things in universe.

After the birth of human beings , they gradually made progress to create the ancient characters. These ancient characters were developed to the Kanji in China more than long, long years ago. Later in Japan, Hiragana was born and further develop to Katakana which became the present Japanese characters in Japan.

Along these flows of development, Kanji became the characters which condensed the most of the thoughts of the ancient people.

These ancient people had been using pictographs called pictorical writings which draw the symbols for figures, shapes of materials.

Koukotsu-moji is the characters made by carving animal bones using sharp edged tools.

For that reason, they scraped bones in a straight line to show the symbols. This straight line scraping function is the one descended to our modern Kanji characters as a stroke.

From the progress of the human being, this Koukotu-moji provided so many element seeds for new characters. Furthermore, due to the development of convenient tools for writing characters, the characters were enhanced to the decorative and artistic levels .

Because the languages developed in China were quite different in each region and this language difference was unfavorable for unifying the countries of China, the first emperor, Shin Huang-ti in Qin dynasty proceeded the unifications of characters called Shouten.

This first unified characters, Shouten, is the origin of Kanji called Tensho-tai.

Kanji has continuously been developed as the human beings has made progress.

In short, the Kanji which Japanese have been using is our great heritage of long processes of the language history as the human history was experienced . So, Japanese should keep this important Kanji for the future generations.

Each Kanji has its own significance and taste, which make us feel a kind of long, long history.

Why wouldn’t we appreciate its deep implication of the Kanji and the ancient eternal flows from the Kanji history.