Kanji in itself and kanji in all its intricacies is interesting. From the way it works to the way it is read, written, and pronounced. Providing meaning to thousands of concepts even with the limitations of the available sounds in the language. As a logographic alphabet, many kanji are also very pictographic to the point where you may be able to guess what the character might stand for. Whereas others require a fairly sharp eye and attention to detail due to their close similarity to other characters.
Here are 7 of the most interesting kanji.

This kanji meaning rain is regarded as a favorite for many new learners of the Japanese language due to its uncanny resemblance to a window with raindrops falling against the glass. It is actually also one of the very first kanji a child will learn in school under the kyōiku kanji.

This kanji is made up by combining 受 which means receive and 心 which means heart, effectively symbolizing the giving away of someone’s deep affection to another. The combination of radicals like this is quite common but only a few are this logical. This kanji only has 13 strokes and is taught in the fourth grade of the kyōiku kanji. 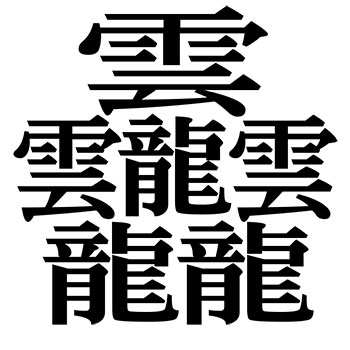 With the 84 strokes required to write this kanji properly, it has a reputation for being one of the most complicated characters on record. It is said to be an old Japanese surname that is no longer in use today. It is made up of three 雲 that mean cloudy and three 龍 meaning dragons, effectively giving the definition of the appearance of dragons flying.

This kanji is one of the easiest to write, memorize, and is one of the most frequently used characters in the whole alphabet. It only has two strokes and it can actually be read five different ways. It is another great example of the more pictographic characters in kanji because it looks like a person standing up.

What makes this kanji interesting is that it is made up of three 木 which means tree or wood which is highly appropriate for the name of a place where one would find quite a lot of trees. It has four different readings and is also included in the first grade of the kyōiku kanji. 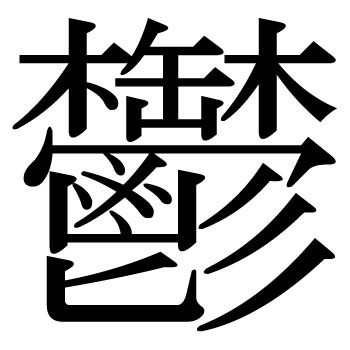 This kanji is known for being fairly difficult to write. Many find it hard to write all 29 strokes in a neat and balanced way. As a result this word, when handwritten or typed, is usually done in hiragana. However, it is a fairly common kanji so it’s best to at least be familiar with reading or writing it.

This kanji is another example of what may stand out to a new learner of the Japanese language and become a favorite. It is unusual in the sense that it almost doesn’t look like it is a kanji character and more like Tetris blocks. It also very accurately represents the concept of a bumpy surface.