Home > Column of Japanese Culture > Do the Japanese Use Kanji Often?

Do the Japanese Use Kanji Often?

There are three separate and completely different sets of characters used in writing the Japanese language. These are hiragana, katakana, and kanji. Kanji is a logographic alphabet consisting of over 50,000 characters representing many words, names, and abstract concepts. Hiragana and Katakana are phonetic alphabets that each has only 46 characters. In spite of the difficulty associated with using Kanji, it is actually used extensively by the Japanese in much of their daily lives.

When do they use it?

The Japanese generally use a mixture of all three scripts in their sentences and therefore their literature. However, Kanji is the one used primarily. The reason for this is that Kanji holds more meaning than actual pronunciation, thereby making communication through reading and writing much more efficient. For example, the kanji for the word car is 車 but this can also be written in hiragana as くるま. Hiragana is used for modifying the root word expressed in kanji to change grammatical elements as well as to represent native Japanese words that do not have a Kanji assigned to them. Katakana is used for borrowed words from foreign languages and to provide emphasis.

If you walk around Tokyo, you will find that most signages use kanji and some directional signs will use a bit of kana (hiragana and katakana) where appropriate. However, when it comes to foreign things like hotel names and English words, the Japanese use katakana as there are no kanji to represent them.

Why do they need all three? 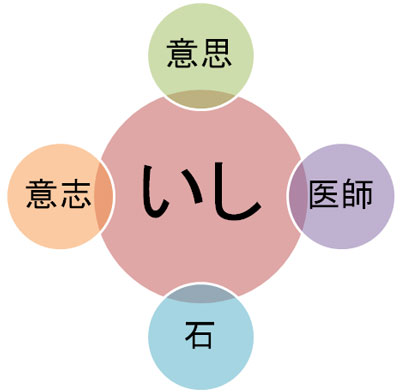 There is a limited number of sounds in the Japanese language and so there are not very many ways to pronounce all the different words. What we end up with is a whole lot of homonyms. For example, “ishi” can be written in hiragana as いし, but it is difficult to tell whether I am trying to say “doctor” (医師), “stone” (石), “thought” (意思) or “will” (意志) as they are all pronounced the same way. But when they are written in kanji, it is easy to tell each word apart. Kanji provides meaning without the need for context.

How much do they need to know?

So while there are tens of thousands of kanji in the Japanese language, it is not necessary to know every single one of them. Even a person who is born and raised in the country will not know anywhere near that number. Jōyō kanji are the characters officially designated by the Japanese government as being for regular use. There are currently 2,136 characters in jōyō kanji and if you were to learn all of them, you would officially be considered literate.

An 11-year-old who will have learned their kyōiku kanji, which is the set of 1006 most essential kanji that are taught from the first grade to the sixth, will understand about 95% of a newspaper. However, If you know at least 500 of the most common kanji, you will probably be able to skim a regular Japanese newspaper and comprehend about 80% of it. Though the jōyō kanji is considered the literary baseline, one would typically have to know at least 2500 kanji to truly read and understand an article without consulting a dictionary.