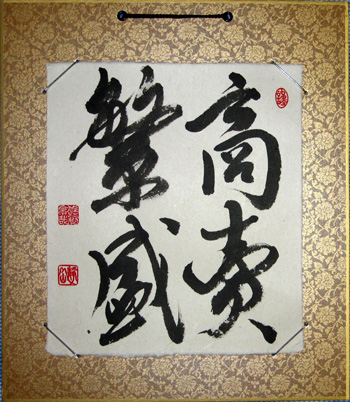 Calligraphy has enjoyed a long and vibrant history in Japan. In order to appreciate Japanese Kanji to the fullest one must also understand the most basic fundamentals of Japanese calligraphy. Also, if you are considering getting a Kanji tattoo, knowing this essential information will help you tell different Kanji apart. This means that the Kanji on your body means what you want it to mean– so pay attention!

Kanji are composed of strokes, which is simply one line made with the brush. The amount of strokes a Kanji has varies quite drastically, beginning from one stroke (一 “one”) to more than twenty strokes (鬱 “melancholy”), though most will be somewhere in the middle.

The other main component of Kanji is the stroke order. To a Kanji beginner, the stroke order may perhaps seem random, but there are general rules regarding the stroke order for Kanji. In most cases, Kanji are written from the top left and then to the right and down. Although this may not seem so important at first, the order in which the strokes are written greatly affects the overall shape and balance of the Kanji.

At first glance, Kanji seem extraordinarily complex. However, Kanji are merely combinations of only three types of strokes. When doing Japanese calligraphy on your own, or discussing your Kanji tattoo with your tattoo artist, these three types of strokes are something that you will want to keep in mind.

The first type of stroke is a full stop, called “tome”. This is simply a line with the end stopping at medium width. To make this stroke, the calligrapher first draws a straight line, and then to end it lifts the tip of the brush up over the line he has already drawn. This creates a sort of slight triangle effect at the bottom of the line if you look closely. An example of the tome stroke would be the vertical line in 十 (“ten”). This is likely the simplest stroke to make but should be underestimated.

The second type of stroke has a hook at the bottom and is called “harai”. One Kanji that uses this kind of stroke is 七 (“seven”). Harai is made by taking the brush and lifting up at a slight angle to the left or right depending on the shape of the Kanji. In order to perfect this stroke, one must confirm he has the appropriate amount of ink on his brush so that the hook portion of the line is neither too light nor heavy. Harai is a very common type of stoke, but mastering it may take a bit a practice.

The last type of stroke is known has “hane”. This stroke is made curving to the left or right and slightly fading out toward the bottom. To achieve this stroke, one must learn to very slowly release pressure on the brush so that the stroke very gradually becomes thin. One example of hane is the long left stroke in 大 (“big”). This is another stroke that will take a little getting used to before being able to write it with confidence.

Tome, harai, and hane are the three essential strokes that make up Japanese Kanji. Once you learn these strokes, you will then have the tools to write any Kanji you wish. While learning the strokes may take some practice, learning them will certainly pay off when studying Kanji or even getting a Kanji tattoo!

The most challenging part of Japanese calligraphy: Kanji balance

Once you have perfected the composition of Kanji and the types of strokes, the next challenge you will face is finding good balance with your Kanji. Imagine each Kanji as having four quadrants, in which each quadrant needs to be given equal weight and emphasis. For beginners, one recommendation is to first fold your paper into four equal folds and then trying writing the kanji with equal balance in each quadrant. Finding proper balance can be a difficult process even for experienced calligraphers, so please do not be discouraged at first! 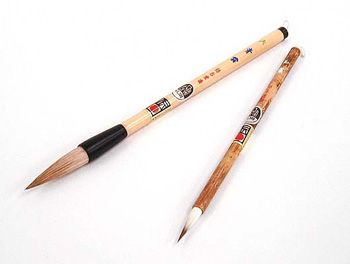 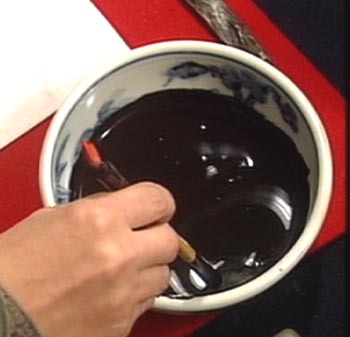 Ink (“sumi”): black ink that comes in solid and liquid forms. Traditional calligraphers will make their ink by hand using solid ink, however, the pre-made liquid form is still an option!

Ink stone (“suzuri”): this is a small flat dish used liquidize the solid type of ink. This is done by mixing the solid block of ink with water and rubbing back and forth until reaching the ideal consistency. 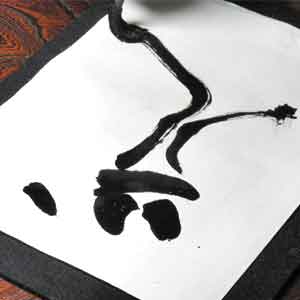 Paper: in general, a higher quality thinner type of paper is used. Thinner paper is better, but it is also important that the ink does not sink through the paper too much.

Mat for the paper: this is used in case the ink seeps through the paper and onto the surface underneath.

Paperweight: used to keep the paper in place while writing the Kanji.

Although the amount of tools used by Kanji calligraphers may seem overwhelming at first, the most important step is to first start trying. In Japanese culture, it is seen as a desirable quality to always have the heart of a beginner, even if you may be a pro. Using this wisdom, why not try Japanese calligraphy yourself? You may find it helps your concentration or even helps you to relax!